Recognize anyone? Me, neither .... 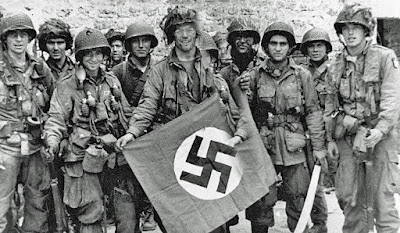 It is amazing to me how some occasions are faithfully remembered and devotedly observed while others are sort of recognized on a hit and miss basis. This year, for instance, I have seen few references to the anniversary of the D-Day invasion of France at Normandy by 156,000 Allied troops from 13 countries on June 6, 1944. This is a photograph of a few of the nearly 8,000 airborne troopers who were inserted behind German lines displaying a trophy of their feat. I wonder how many of these guys survived the war ....

Another example of fleeting fame is Minnesota writer Sinclair Lewis, the first American to be awarded the Nobel Prize in Literature. It came in 1930. Lewis and another Minnesota writer, Diane Wilson, were featured in a post here on April 19. Saint Paul Pioneer Press journalist Mary Ann Grossmann has a follow-up piece in the newspaper today about Lewis and an exhibition at the Minnesota Historical Society. The exhibit centers upon the 100-year-anniversary of the publication of "Main Street" -- the premiere Lewis novel.

Lewis was ahead of his time, Grossman notes, writing about topics such as divorce, adultery and abortion:

"In 'Main Street,' Carol Milford moves from the city to a tiny Gopher Prairie (Sauk Centre) after marrying the local doctor. She tries to bring culture to the small town, but is met by gossip, greed, conventionality and the bigotry of small-town minds."

Lewis spent his last years in Europe, Grossman writes, often drunk, having alienated most of his friends. It was 22 degrees below zero the day of his funeral at a "Main Street" cemetery and his ashes scattered there.