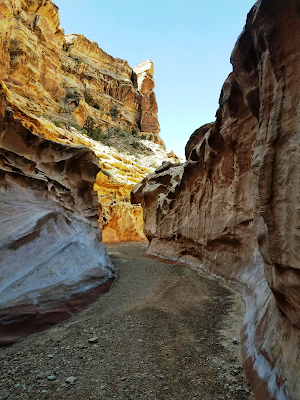 In as much as I am aware, there is not a "no man's land" between Colorado and Utah but, if there were, it probably would look something like this: A narrow, winding pathway between sheer cliffs just high enough to prevent escape. I would not be surprised if Native Americans used this place to trap animals in the distant past or if some fools decided to set up their camp in it and perished in a flash flood. Oh, well, it was interesting and fun to take a stroll through this cut through the rocks and to speculate about those who have been there in yesteryear. What is the past if not something to think about and to learn from and to play with, as in speculate? Unfortunately, there are many who try to rewrite history -- to change the past -- to turn things long ago said and done into their own conception of how those things ought to have been ....

Posted by Fram Actual at 5:55 AM 9 comments: Links to this post 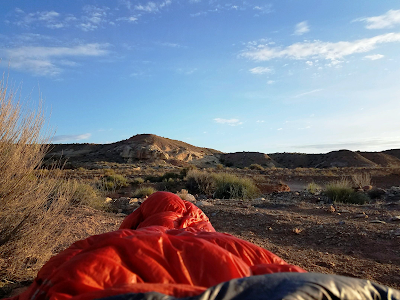 I am not at all certain how many nights I have spent sleeping under the stars and would not even hazard a guess, but it has been many/many/many. Try putting a number on that.
Zigging and zagging between the Utah and Colorado border presented an ideal opportunity to attempt a count of the stars. Estimates for just the Milky Way alone are between 100 and 400 billion, and that is just the tip of the proverbial iceberg in context to the amount in the universe, whose numbers of galaxies escalate into the trillions with each containing billions of stars .... sort of an overwhelming / frightening / humbling thought, is it not? Whenever you feel a smidgeon of arrogance creeping into your life, spending a night under the open skies counting stars is a good way to return to reality.
I ordinarily do not unholster a pistol in unfamiliar territory because the sound of gunfire often draws attention .... sometimes unwanted attention. But, opportunities for "trigger time" are something less than abundant for me these days .... so, guess what?
David Bowie is a favorite of mine. I saw his Glass Spider Tour a number of years ago right here in Saint Paul. During that concert Bowie and the cast performed, "Modern Love," as the finale. It is here today for those who never saw the Spider. The other piece, "Heard It in a Love Song," by the Marshall Tucker Band is here because it sort of is a cowboy song and suits me, and because it is a "purrtee little love song."

"You must be a prisoner in disguise" 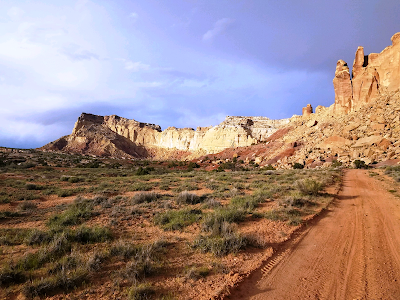 The path less traveled / no traffic jams on this road / the trail that never ends .... an individual could make a case for all three statements about the locale in this photograph and, perhaps, no one would argue the point. Where is this place? Since I do not utilize GPS, I really am not sure, but money has it the location is somewhere in either Colorado or Utah. No matter .... even though a bit desolate and lonely, it is a nice place, a serene place, a fine place for going on a hike ....

Posted by Fram Actual at 5:55 AM 7 comments: Links to this post 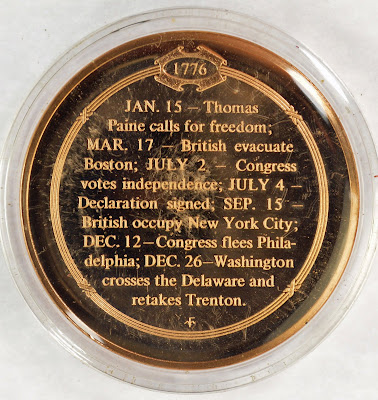 I suppose it is a rather implausible statement for anyone today to say they remember 1776 well.  While it is not uncommon for individuals to reach triple figures when counting the years of their lives and literal interpreters of the Bible will point to Methuselah who it was claimed lived to be 969 years old, a life span of 243 years is well beyond the realm of realistic possibilities.

This is true, but a matter of two centuries is but a hop, a skip and a jump in time for a student of history and it is very possible to exist in 1776 or anywhere in the mind. There have been many occasions, for instance, when I have been somewhere and seen nothing but clouds the sky and unblemished woodlands or seemingly endless water around me and thought if I did not know the date and the time, I could be living in any moment in the past. A dash of imagination mixed with a measure of knowledge poured into the right conditions can create a most magical potion.
To cut to the chase, parades and picnics with potato salad topped off by fireworks are well and good for the Fourth of July -- Independence Day -- but it would be more than appropriate to pause for a while today and remember that 1776 was among the most momentous years in the history of the United States ....
And, to acknowledge the sacrifices of generations past to create the freedoms which exist for those alive today ....
And, to pledge renewed energy and effort to ensure the continued existence of those freedoms ....