A (sort of) vision of two handguns 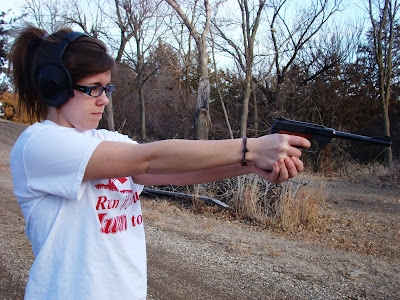 No matter what anti-gun, elitist fear-mongers would tell you, American gunners come in all shapes and sizes and colors and sexes and ages. Here is another from among the circle of people who are part of my immediate world. She is firing a Browning Challenger pistol. Notice the safety glasses, the hearing protectors, the absolutely perfect grip for holding a handgun when firing it in a controlled situation. This is the type of handgun which is used mostly for target shooting. There is an "old" saying which goes like this: "When guns are outlawed, only outlaws will have guns." Essentially, it is true. A thousand laws preventing ownership of guns will only keep them from honest citizens. Outlaws -- criminals by definition -- do not obey laws and will obtain guns no matter how many laws are on the books. And, these same laws may well leave honest citizens disarmed and unprotected against criminals. And, unlike many anti-gunners, I do speak from real-life occupational and personal experience.

A follow-up about a wartime pistol

Some few of you might recall that I placed a post here on February 24 about a pistol and its accompanying holster. I was seeking, inquiring and searching for information about the man who carried it during World War II. The pistol was a Browning Model 1922, and bore hallmarks of the German military.

Among the words I wrote then were these: "If no one does (contact me with information), then I will look for another branch in the road ..... Let us see if the steps continue, if the story evolves. Or not."


If you wish more background information than that, you can always read or re-read the post.

It was no surprise to me that I had no responses to the post, so I took "another branch in the road" and walked it by myself. The result was this: I have identified the original "owner" of the pistol. I know he was in the German Luftwaffe. I know his name, when and where he was born, and when and where he died. I know a few other things as well, but the only other one I will mention is this. He died in March 1945, less than six weeks before the war ended.

There is a saying to the effect that no one wants to be the last soldier killed in a war.
Whether it makes sense or not, it bothers me a great deal that the man who carried this pistol was among the last in that war. There are many things that bother me which I find it best to keep to myself except when in the company of close friends and six drinks (or more) have loosened tongues. I once collected handguns used by famous fictional characters in novels. It is not so easy to own a pistol carried by an actual man killed in a war.

World War II might seem like ancient history to many, but, to me, who has had ancestors in every American war since the Civil War and who has slept in many places which once-upon-a-time were battlefields during the Plains Indian Wars, it is only the blink of an eye in the past -- just a glance over my shoulder in the distance.
That is the way it will be with this story other than to say that I hope to visit the cemetery where this man rests in the not too distant future, just as I visited both Allied and Axis cemeteries at Normandy a few years ago. It is a measure of trying to understand why we are what we are .... from both the inside and the outside.

Do you think that would make me happy, he asks, with a smile on his lips?

To say good morning and really mean it 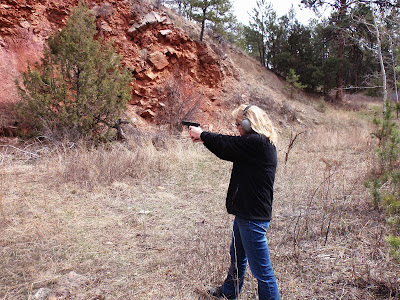 This young lady firing a Glock pistol is not one of my ex-wives or even among my former girlfriends. Rather, she is a good friend from one of my past incarnations. Beyond that, she is someone who I trust to watch my back. She understands the nature of firearms. She knows firearms are tools, and that whether they are used for good or for evil is determined not by them, but by the person holding them. She understands that acquiring knowledge and skill in their use is nothing to fear, and that such knowledge and skill might save her life or the lives of others some day. She realizes -- as not everyone does -- that only tyrants and dictators wish to take guns away from the ordinary citizens of America or of any nation.


I acquired an old, single-shot, Stevens, .22 caliber rifle a few days ago. There is no way to determine its exact age, but this particular model was made only between 1894 and 1912.


It is, in the least, one hundred years old.


I fell in love with it immediately. Maybe, I even will give it a name. Remember? Davy Crockett named his rifle "Old Betsy."


Is it some manner of sin to be in love with an inanimate object, especially one for which the primary intent is killing? I am not certain if I mean that question to be rhetorical or not.


I have kissed this rifle a few times. I really love it. I wish it could talk and tell me where it has been and who has held it and what it has seen since it was created. I frequently feel the same way about old pocket watches and old coins.


As for being in love with inanimate objects, they do not necessarily have to be old. I bought myself a Rolex Submariner for my birthday in 2011. I kiss it regularly, too. I love it. I never have regretted the thousands of dollars I spent to obtain it.

It was my second Rolex. I had purchased my first a few decades ago. It was sort of stolen, but, it might have saved my life at the same time. That is a story for another day -- a six-drink story.


So, is it a manner of sin to love an inanimate object and to kiss it?


I might remind you that I believe in the concept of Manitous -- that everything, animate and inanimate, has a Manitou, a spirit within it, a personality, if you will, a reasoning, magical, intelligent power. Therefore, it is the Manitous of my Rolex and of my rifle to which (or to whom) I am displaying my love and emotional attachment.


Well, enough for now. Life is as simple or as complicated as each of us wishes to make it -- as earthly and secularly barren or as magical and spiritually active as we individually form ourselves  to be. Personal faith, belief and will power make us what we are, and that has been true since the dawn of time.


So, have you kissed your watch and your rifle today?

Somewhere, there exists the stairway