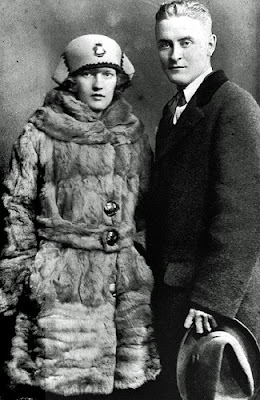 This is more on the order of an announcement than a post ….
Although F. Scott Fitzgerald is not among my "favorite" writers, as a student of literature and an English major I truly would be derelict not to mention the week-long 14th International F. Scott Fitzgerald Society conference which opens this coming Sunday in Saint Paul. Lifting commentary directly from the local newspaper -- the Saint Paul Pioneer Press: "Scholars (more than two hundred) are coming from all over the United States, as well as England, Holland, Germany, Iran, Sweden, Scotland, Japan, Australia, India and Macedonia."

This sounds like it has the makings for an actual "Parisian" or "Pamplonian-style" party to me.
Fitzgerald, you may or may not know, was born on September 24, 1896, in a house only a few miles from my current residence. (I hope it is obvious this was a few decades before my arrival.) He lived there until he was fifteen, when he was shipped off to boarding school in New Jersey. He returned to Saint Paul after being dismissed from Princeton due to failing grades. Again, lifting directly from the Pioneer Press: "With nothing to lose, he re-wrote 'This Side of Paradise' and became the inventor -- and chronicler -- of the Jazz Age. After their marriage (in 1920), Scott and Zelda (Sayre) returned to Saint Paul for the birth of their daughter, (Frances Scott) Scottie. Fitzgerald never came back to Saint Paul after 1922 (despite urban legends that place him at various places in town over the years)."
Rather than attempt to list the events and activities and programs associated with the conference, I will instead suggest an internet search which will provide anyone and everyone with more information than an individual is able to digest. Since I will be out of town, I will be unable to attend any presentations .... but/but/but, I will be able to visit the primary photographic exhibit, "Sight Unseen: Rarely viewed Photographs of F. Scott Fitzgerald and his Family and Friends," at the George Latimer Central Library in Saint Paul .... see you there ?? .... maybe ?? And, since this is not an actual post, there is no need for actual comments ....
As a footnote, it is worth mentioning that this conference alternates between the United States and Europe. It was held in Saint Paul in 2002, and this will be the first time the international event has ever gathered in the same city twice.
The photograph here, incidentally, is of F. Scott and Zelda about the time of their marriage. The songs are two of my favorites sung by two of my favorites .... hmmmm .... later, baby ....

Posted by Fram Actual at 5:55 AM No comments: