Being the old-fashioned sort .... 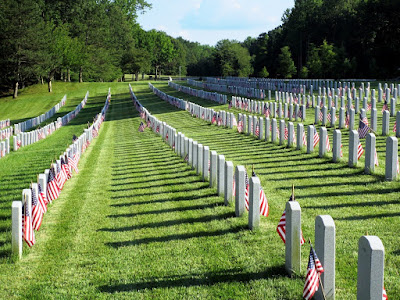 Being the old-fashioned sort, I decided phooey on the three-day weekend and to make note of Memorial Day on its original and traditional date, which from 1868 when it began as a day to honor and to remember Civil War dead until 1970 was today -- May 30. Along the way, the occasion was extended to honor all war dead and gradually evolved into a time to also remember family and friends who no longer walk the surface of the earth. The United States Congress, rationalizing away actual/factual history, changed the date to the last Monday of May in 1970. Having once upon a time been in the Marine Corps, I also decided to use a photograph taken a few years ago of the national cemetery at Quantico, Virginia. It is a national cemetery for veterans who served in the United States Armed Forces.
Quantico National Cemetery is on land bordering Marine Corps Base Quantico. I spent a few of the toughest, most demanding months of my life at Quantico back in the day. As a side note, there are seven memorials at this cemetery. A monument to Colonel Merritt "Red Mike" Edson's Raiders was the first memorial established there. It is dedicated to the 800 members of the First Marine Raider Battalion, which from August 1942 to October 1943, played a major role helping American forces push back Japanese troops. This is actual/factual history.
If you only watch one of the videos, make it the last one. It will leave you with absolutely no misunderstandings about any so-called glory of war.

Posted by Fram Actual at 5:55 AM 4 comments: Links to this post 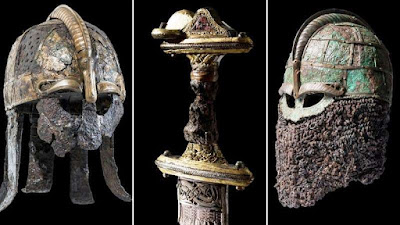 Images courtesy American Swedish Institute
The most negative element about concerts (for me, anyway) is that they almost always are a singular event -- a certain day, a certain time, a certain place -- which means you must adjust your schedule and your time if you want to attend. The best thing about an exhibition (for me, anyway) is that there is a period of time -- usually at least days and sometimes months -- in which the individual (in this case me) can pick his own day and time to attend. Unfortunately an exhibition most often stays in one place and the individual must go to it rather than it come to him -- but, we cannot have everything the way we want it .... right?
Trying to avoid creating another dispute (there are so many divides these days: abortion, race relations, gender argument, on and on ad infinitum) as an individual primarily of Norwegian descent, I will cross the line which sometimes exists to promote and to attend a Swedish Viking exhibition which began last week and continues through October 27. It is under way at the Swedish American Institute in Minneapolis.
Straight from a press release: The exhibition is a collection of Viking paraphernalia that has never been outside of Scandinavia until this year. Many items in it are around 1400 years old, with Viking helmets, swords and weapons for attack and defense, as well as jewelry, glass vessels, bowls and other objects with magical importance. The relics tell stories both about the society and the people buried with them.
The exhibits are divided into thematic sections on Viking warfare, maritime trade, a ship burial, Norse gods, the Baltic Sea and geo-political relationships to other cultures. New light is shed on how early Viking society was organized, the role of women and the development of maritime innovation that enabled the Vikings to reach faraway lands in the East and the West.
I might add it is beginning to look doubtful that I will be able to produce a post this month about Ole and his Boat as I said I would. I have not even begun a reread of the novel, "The Boat of Longing." I continuously am getting sidetracked, mostly by other books, for instance one I was unaware of until a few days ago by H.G. Wells entitled, "Things to Come." It was written by Wells as his vision/predictions about the future between 1933 and 2106. Some hits; some misses. I am tempted to write a post about the book while it still is fresh in my memory, and probably will do just that.
By the way, this is another post which will be visible to any and to all for two days only before it seeks temporary shelter behind the curtains:
Time flies whether you are having fun or not ....

"Here's to the future for the dreams of youth" 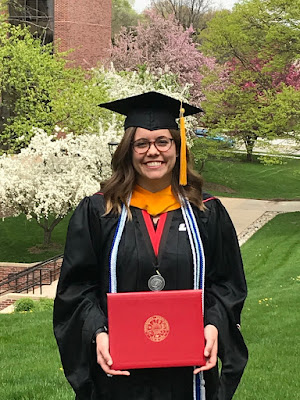 To read or to reread -- that is the question 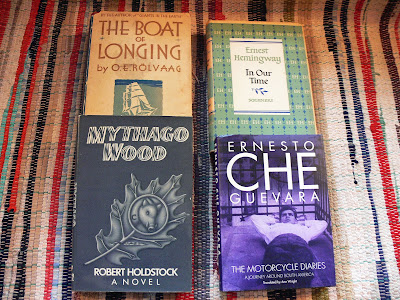 Posted by Fram Actual at 5:55 AM 6 comments: Links to this post