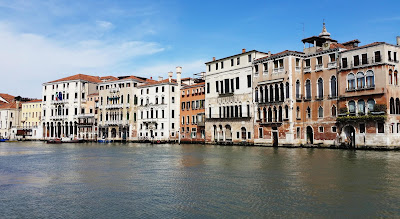 Anita asked me for more photographs. I offered her a few excuses why it is difficult for me to provide any at this time .... but, after a bit of thought, I decided to toss in this one. It is a "mate" to the photograph I used with my March 31 post, and, presumably, it is more recognizable than the one I used then, a month ago, taken inside Harry's Bar. Hmmmm .... a month ago, time flies, and, actually, both photographs are about six weeks old now. Anyway, I assume this photograph on this page, whether it is a few weeks old or not, will give you something to think about and, I hope, taunt you a bit ....

I really am laughing .... & a political comment
In most respects I am a political/fiscal/social conservative. The most notable exception to my conservative beliefs is in regard to environmental issues. There, I am more liberal (some might say radically so) than most progressives. Just do not bring up the "con job" of the century -- climate change -- as an environmental issue or I will laugh at you. Study history in terms of the climate, and you will understand what I mean and the realities of an ever-changing planet.
Since the beginning (of what ??), my thought has been that Hillary Clinton and Donald Trump should be running as a team for the presidency / vice presidency of the United States. They are like two sides of a coin. Trump is as much of a conservative as a fairy tale frog is a prince. In reality, Clinton probably is more conservative fiscally and in terms of foreign policy than is Trump. By the way, come to think of it, actually Trump looks more like a lizard than a frog. Really. Look at his face closely.
So, to me, the presidential race is coming down to a choice between two liberals -- Clinton or Trump. My feeling is that conservative voters should stay at home on Election Day next November to demonstrate our dissatisfaction with the process.

Why not? If either of these two becomes our "commander in chief," we (conservatives) are going to lose big time as will the United States as a haven of freedom and equality. I might add that Trump appears to be the most rude, crude, disgusting individual I can imagine representing the United States on the world stage. The man constantly demonstrates that he is morally and ethically (as well as, on occasion, fiscally) bankrupt.
There is a move afoot among some of the big-money conservatives to run retired, Marine Corps four-star (a general) James Mattis on an independent ticket for the presidency. I suppose a man whose call-sign was "Chaos" and whose nicknames included the "Warrior Monk" and "Mad Dog Mattis" would frighten a few potential voters away (I am laughing), but I truly wish it would happen. Symbolic gestures do have real meaning and can initiate real action.
In a historical sense, this election year -- coming in tandem with the 2008 and 2012 elections of Barack Obama to the presidency -- is allowing me to more clearly understand how narcissistic, delusional demigods such as Benito Mussolini and Adolph Hitler came to power and to comprehend the manner of madness that erupted in France and carried Marie Antoinette to the guillotine in 1793: A great many people -- perhaps, all of us -- are simply more than a bit crazy barely beneath the surface .... you know, the old cliché about the veneer of civilization.

This year also might demonstrate the relevance of the Electoral College, an ingredient in the process established as a safeguard by the forefathers in 1787 and which, I doubt, most Americans even are aware of, much less understand. We shall see.

Ok .... enough for now and on to the music, this time ranging from fantasy of the sublime to chair dancing rock .... remember those words here from way, way back in 2009 ?? I am sure someone does .... she thought it meant I might be bound to a wheel chair !!
But first, I once knew ....
I once knew a girl, a Leo, a child of fire, who wished to live in Florence -- in Firenze. We almost made it there .... almost, but did not. We did not, perhaps, because I am a Pisces, a water man, and my dreams often are of Venice at the time of carnival. Sooner or later, maybe, she who is she and I will meet again somewhere at a place in between fire and water ....

A few words from the lyrics
of  "My My Hey Hey"
by Neil Young & Jeff Blackburn
My my, hey hey
Rock and roll is here to stay
It's better to burn out
Than to fade away
My my, hey hey.

Posted by Fram Actual at 5:55 AM 14 comments: Links to this post

Posted by Fram Actual at 9:00 AM No comments: Links to this post

Posted by Fram Actual at 11:55 PM No comments: Links to this post