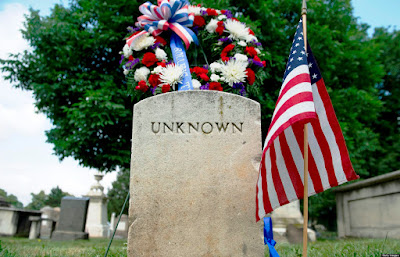 
It began as an event to honor and to remember the Union dead from the American Civil War. After World War I, it was extended to include all the men and the women who died while serving in any war or military action. It initially was called Decoration Day, becoming Memorial Day after World War II and officially named as such, by act of Congress, in 1967. Over the ensuing years, it has become more and more a day in which people recall and honor family members and friends who came before them. The affiliation with the poppy, incidentally, began in 1918 and the poppy became the American Legion official symbol of remembrance in 1920.


To maintain my Semper Fidelis attachments, included here are three videos (sort of) related to the U.S. Marine Corps. And, in keeping with one of the traditions of the Corps, the photograph was "liberated" from the internet where it was attributed to Getty Images.

Welcome, to the Merry Month of May 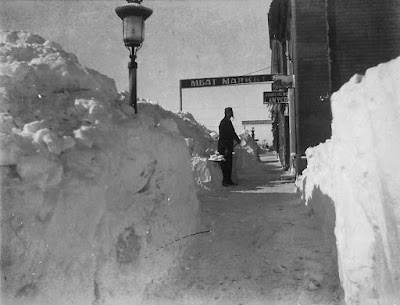 No, this is not a photograph taken from the deck of Fridtjof Nansen's ship, "Fram," to illustrate what happens to a sailing vessel frozen into the Arctic ice cap or one taken recently to demonstrate the ferocity of Minnesota winters. This is a sidewalk on Main Street in Cottonwood. Best guess is that the photograph was taken around 1910 .... Cottonwood is the small, rural, Minnesota town in which I spent the first eighteen years of my life.
While the town did not even exist until 1888 when a post office was established and the railroad arrived, the first homesteaders had appeared in 1871. Although I was not present in 1888 or even in 1910, this is the way I remember Cottonwood during winter months and the way I remember the depth of the snow: One did not shovel the sidewalk; rather, one shoveled a one-way path along the sidewalk.

The small sign in the foreground reads: "J V Mathews Lawyer"
Behind it, the sign proclaims: "Meat Market"
Further down the street, the sign says: "Restaurant"


There is a photograph of Mathews, incidentally, in, "An Illustrated History of Lyon County Minnesota," published in 1912. He was born on his parents' homestead on March 30, 1879, moved to Cottonwood on March 12, 1907, and had his office on the second floor of the Grieve & Laingen Building. Although the "snow shoveler" is not identified, he very well might be Lawyer Mathews.


By the way, welcome to the Merry Month of May. I shoveled snow both yesterday and today ....
Posted by Fram Actual at 5:55 AM 39 comments: