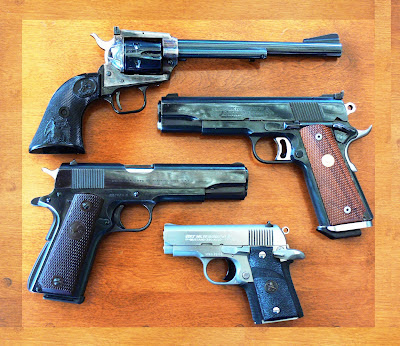 Four Colts, none of which require feeding or exercise, but each of which enjoy them immensely. My Colt New Frontier single-action revolver, shown at the top of the photograph, is nearly identical to the Colt Model 1873 sidearm issued to Seventh Cavalry troopers at the Battle of the Little Bighorn, which took place one hundred, thirty-six years ago today. The two pistols in the middle are variations of the Colt Model 1911, while the "little guy" at the bottom is a Colt Model 380 Mustang. Colt handguns have been intregal to the U.S. military since the company's origin in the 1830s.

A few times here and elsewhere, I have written or said that if I had a time machine which would take me to three events in the past, one would be to the Little Bighorn River on the plains of southeastern Montana on June 25, 1876. Look at your calendar. Today is the day; only the year has changed.

This was the place and the time a few hundred troopers of the U.S. Seventh Cavalry, some Crow Indian scouts and a few civilians, including one newspaper reporter, under the command of Brevet General/Lieutenant Colonel George A. Custer died at the hands of a few thousand Sioux and Cheyenne Indians. An unknown number of Sioux and Cheyenne died in the battle, as well, which came to be known as Custer's Last Stand.

Perhaps, a thousand or more books have been written about the life of Custer and the battle which took place that day. I have read many of them, have visited the battlefield and, at times, have almost(?) become obsessed with the final moments of so many men.

Not a single man among Custer's immediate command of five troops (companies) saw sunset that day. Included with Custer among the dead were two of his brothers, one of whom had won two Congressional Medals of Honor during the Civil War, a nephew and his brother-in-law. In all, nearly three hundred were killed.

I am not going to write about the event here other than to say Custer and his troopers have been both glorified beyond reason and vilified beyond logic during the one hundred, thirty-six years that have passed since then. My own opinion, from having studied the battle in a "somewhat" obsessive manner, is that there were some acts of bravery and some instances of panic and cowardice, but, by-in-large, the command followed textbook tactics of the era that day and died while facing their opponents. There are not many instances in history where a few hundred came out the winners when facing a few thousand.

The only significant, fatal error that day was Custer's usual disregard for common sense and charging head-long into a life-and-death struggle without knowing that, in effect, he was riding off the edge of a cliff into oblivion due to the sheer weight of his opponent's numbers.

I would like to know why my fascination with the Little Bighorn battle exists to the degree that it does, but that probably will always be as much of a mystery as are many of the unit and individual actions which took place within the battle itself. To see the battle, to know it, to understand it, to unravel the mysteries of each and every moment of it -- these form the reason it would be one on my list of three to reach back in time and to witness.

(Remember me? My name is not only Fram Actual, but Fram the Fortunate .... and, a few others, not the least of which is Fram the Curious. I wish to know what it was to hear the voices and to see the faces of the past; to smell the air of yesterday; to know how the sky looked when only birds possessed it; to feel the weight of an iron broadsword in my hand; to watch a midsummer night's dance .... well, to experience it all, I guess, but some things, like June 25 at the Little Bighorn, more than others.)

The Plains Indian Wars and the entire era of American Western history from about 1850 to the close of the Nineteenth Century have a firm grip on me, and a few other battles -- such as the Fetterman Fight in Wyoming and the Beecher Island Battle in Colorado -- lure me in almost as deeply. I have camped and slept overnight alone on those two battlefields, and would love to do so at the Little Bighorn if the federal government did not prohibit it. These nights have been mystical experiences.

Well, now I have marked the anniversary still one more year, as I am certain I will do for as long as I live. This time, you have been here to take note of it along with me. Thank you .... see you next year.

Posted by Fram Actual at 3:33 AM 4 comments: Links to this post 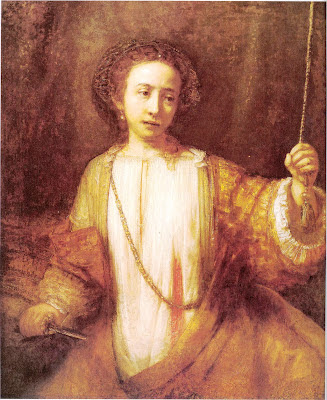 Something to think about

The last time I stood before a Rembrandt, I was at the Royal Palace in Warsaw, Poland. A friend and I stood alone in a room with two paintings by the Dutch master. Even with the single strand of braided rope barrier, the paintings were almost near enough for me to reach and to touch. I was both amazed and thankful the Polish people allowed us to be so near to those unshielded, unprotected, priceless pieces of art.

The photograph shows a work by Rembrandt that resides in a permanent collection hardly twenty minutes from where I live, yet, I have not seen it -- so far -- but soon. It is called, "The Suicide of Lucretia," and was completed in 1666. Its home is in the Minneapolis Institute of Arts. If you do not know the story of Lucretia, I will leave you to your own devices to learn it. But, I will mention that writers no less than Geoffrey Chaucer and William Shakespeare have provided their versions of the tale.

Now then, the primary purpose of these words is this: "Rembrandt in America" will open Sunday (June 24) and will continue until Sept. 16 at the Minneapolis Institute. The exhibit features more than thirty (yes, 30) of the artist's paintings, as well as another twenty or so (yes, 20) pieces once thought to be the work of Rembrandt. This ensemble will become the temporary companion of "Lucretia." This showing is billed as the largest collection of Rembrandt paintings ever assembled in the United States.

So, this is not a post. Think of it as a personal invitation. In the meanwhile, can you come up with a better way to spend a few hours on a summer's day than by meeting Rembrandt Harmenszoon van Rijn face-to-face? If you are able, tell me. If you are not, maybe, we will find ourselves standing side-by-side, together, with one of the genuine masters in the realm of painting.

Posted by Fram Actual at 3:33 AM No comments: Links to this post