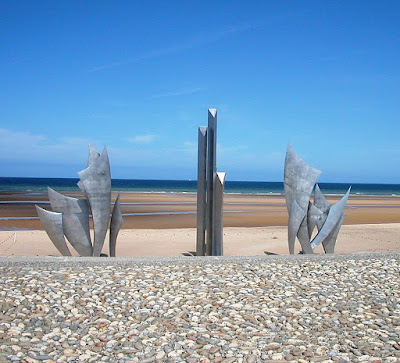 This is a segment of the memorial at Omaha Beach in Normandy, France, as it appeared in June 2004 -- sixty years after the invasion of northern Europe by American and allied forces during World War II. Now, another dozen years have passed since that momentous event and since my eyes gazed at the sand and the sea and tried to visualize what it had been like to have been there on that day -- D-Day 1944 -- the anniversary of which, June 6, is just a week from today.

Life went on for those who survived the battle at Omaha Beach, and today -- Memorial Day 2016 -- offers a moment in time to pause and to remember those who fought not only there, but in every war in defense of freedom and the American way of life -- most especially, those who lost their lives. What began as "Decoration Day" to honor Civil War dead has blossomed into a day of parades and picnics, as well as remembrance. And remembrance -- at least in my corner of the earth -- has come to include not only individuals who served in the military of the United States, but all the members of our families. Today is a day to think of our lineage, our ancestors, all those who came before us, and to honor their memory with love and respect and gratitude.

Have a good Memorial Day, thanking those who have made it possible for we descendants to enjoy life, liberty and the pursuit of happiness.

Posted by Fram Actual at 3:33 AM 14 comments: Links to this post

(Interlude: Sorry, I could not resist ....) Dedicated to "Peace Maker Mickey" Obama


You take a community organizer (whatever that is) who is an attorney who was a "senior lecturer" (whatever that is) in constitutional law at a university; who served a term as a state senator and a term as a United States senator and recently was elected president of the United States -- you take him and give him the Nobel Peace Prize (Why? In anticipation, I suppose, of good things to come.) -- and, who do you have ??

Well, the stars often have a way of mocking human kind. This week, President Obama (otherwise known as the smartest guy in the room and the man who would be king) became the longest serving war president in the history of the United States. You read that correctly. Obama now has been at war longer than any other American president .... ever, ever.


And, barring a cataclysmic end to the world as we know it before his term of office concludes next January, with the country in combat in Afghanistan, Iraq and Syria (and, maybe, Libya) he will leave behind the ironic legacy as the only president in American history to serve two complete terms with the nation at war. In addition to the countries listed, Obama also has approved air strikes and/or special operation ground action in Pakistan, Somalia and Yemen (and, a couple other places, actually).


Uff da, as my Norwegian grandmother used to say. You put the cart in front of the horse, and what do you get ?? In this instance, you get a world at war, a Nobel committee composed of Norwegian legislators whose faces should be redder than red and an outgoing American president who ought to be ashamed of himself, but is too narcissistic ever to admit a mistake .... or two .... or a few hundred ....

Tens of thousands around the world have died because "Mickey Obama" was the wrong man in the wrong place at the wrong time .... and, it now seems likely American lemmings might be on the brink of electing another delusional narcissist: "Never Donald 'Goofy' Trump" .... hmmmm, or, please, not a self-serving, lying, incompetent, former first lady to the Lothario-in-chief .... no names, but her initial are HRC. If there is a god, apparently he/she/it no longer loves America ....

(Interlude: Sorry, I could not resist .... ) Dedicated to "Never" Donald Trump

Maybe, I will write a few words to accompany this in the days ahead, maybe, I will not. No matter, because, actually, the video says it all .... political philosophy and principle form the structure of beliefs and formulas for codes of government and society itself, not political parties. The Republican Party is in the process of becoming an element of history (i.e. extinct) rather than a force for the future. It is time for a third party to emerge consisting of what once were conservative Democrats and moderate Republicans. Anyway, thank you, Freddie & crew, for your portentous piece ....
Posted by Fram Actual at 5:55 AM 14 comments: Links to this post